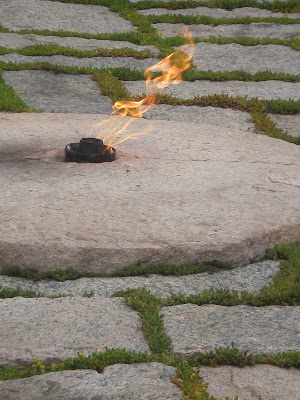 Duane and I just got back from a lovely whirlwind trip to D.C. for the Memorial Day weekend!  I don't know WHY I say "whirlwind" anymore, because ALL of our trips are like that.  Flying stand-by tends to limit flight options, so, we headed out Friday night, and headed back last night (Sunday), as the return flights on Monday looked REALLY full.

This was my NINTH trip to D.C., so I'm not quite as "spazzy" about doing stuff.  Our first trips there were a little frantic, as I wanted to see EVERYTHING, and had very little time to do so.  Now that we've seen most of the stuff on my "To See" list, we can just focus on enjoying our time with Duane's friend Peggy, and pick and choose what we want to do.

We started out with breakfast at a cool diner near Peggy's place, and were joined by her friend Alberta, who we met on my second or third trip there, and who we always enjoy being able to spend time with.  We all caught the metro after breakfast, and headed to Arlington National Cemetary...A LOVELY place to honor those that have served our country,  It's very peaceful, and quiet there, and the lines of tombstones are very sobering and serene. 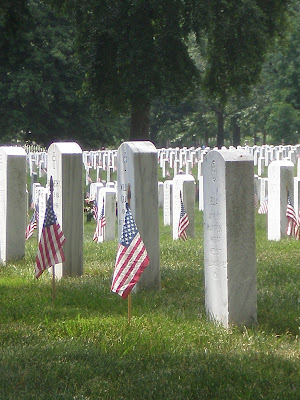 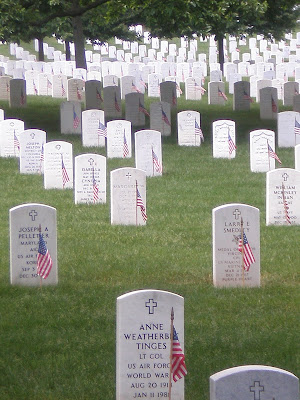 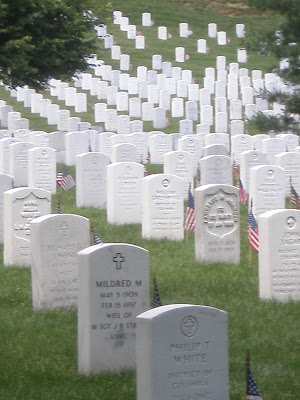 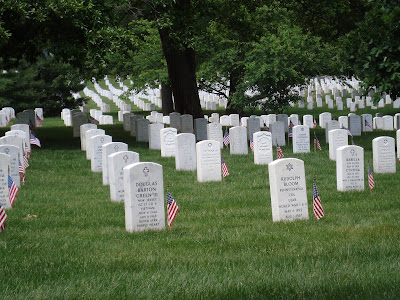 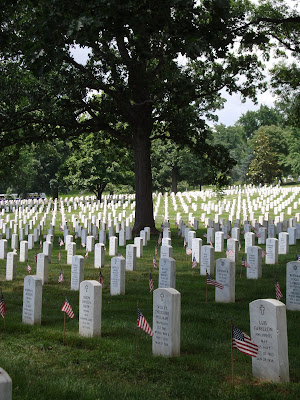 We were able to see the "changing of the guard", and had a chance to walk through the "old part" of the cemetary, where soldiers from the Civil War are buried.  We spent a little time at the graves of the Kennedys, but it was "HIGH SEASON" for tourists, so couldn't get very close.  I DID see the graves of Bobby and Ted Kennedy for the first time.  It was an honor to be able to pay my respects to them. 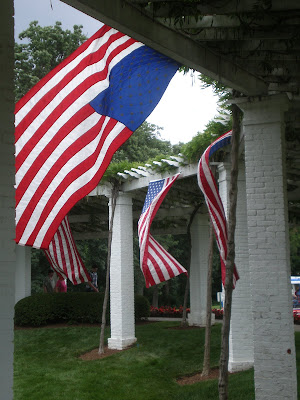 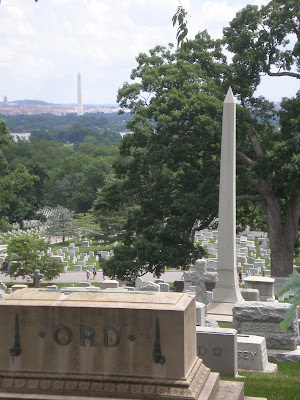 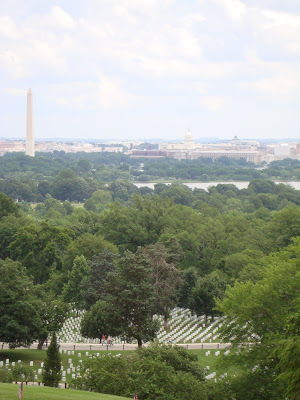 After a few hours (and acquiring a nasty sunburn) there, we headed to the Pentagon to see the 9/11 memorial.  Wow!  What a sobering thing to view.  They've created "benches" for each person who died in the tragedy.  Each bench, arranged by birth year of the victim, has the name of the person inscribed on the bench.  There is a pool of water, with a spotlight to reflect at night under each.  The benches of those who died on the plane face away from the Pentagon, toward the sky.  The benches of those who died in the Pentagon, face the Pentagon.  The youngest vicitim was three.  The oldest was 79. 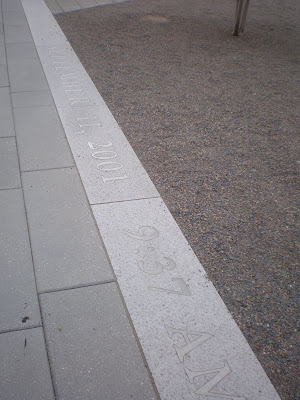 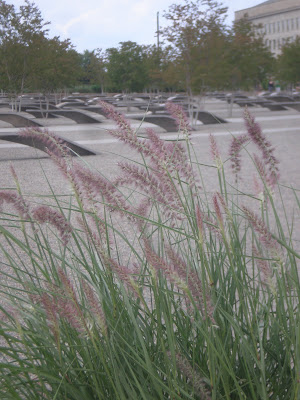 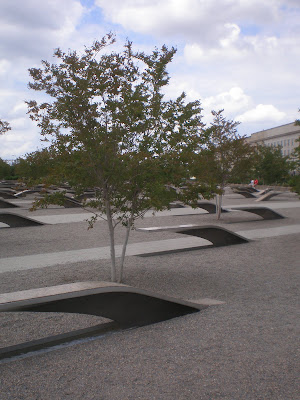 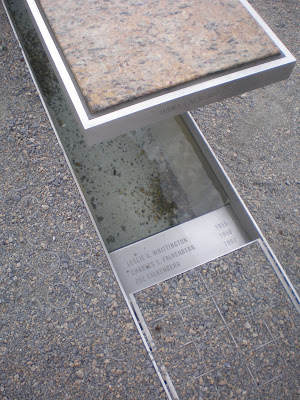 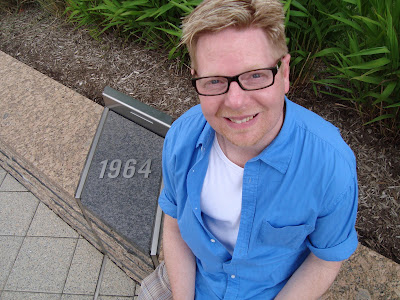 After two very contemplative, hallowed, sober "tourist spots", we broke the heaviness with a trip to the mall at Pentagon City.  We found a lot of great stores, and had a good time walking around.  Pentagon City is a fairly new area, near the airport, and we'll need to explore it further on our next trip there.
We then took the metro back to Peggy's, regrouped, and then went to an Irish Pub for dinner.  We finished the evening with a movie in Peggy's basement.  A full day, but we saw some new things!
Sunday was very mellow.  We got a late start, did a little shopping, stopped at a cemetary near Peggy's house so that she could pay her respects to a former boss, and then headed to Maggiano's for lunch!  The Maggiano's in the twin cities closed last year, so we've been going through "lasagna withdrawal".  It was DELIGHTFUL to be able to enjoy some again!
We watched a movie back at Peggy's after lunch, then headed to the airport, and caught the 6:30 flight home, snagging the last two remaining seats in first class (!).  It was a BUSY weekend!  I think I was in bed by 8:30!!!!
Here's hoping YOU were able to pay tribute to those who have served our country, and that you are enjoying the Memorial Day weekend with family, friends, and fun!!!!!
Posted by Jeff S. at 11:44 AM No comments: 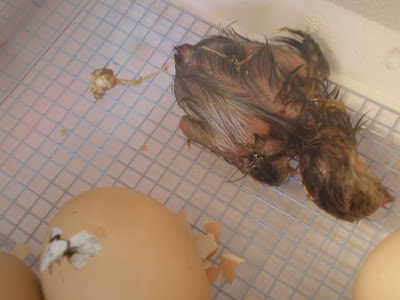 Chickens are cool!!  As part of our 1st grade GROWING AND CHANGING unit of inquiry, we hatched eggs this month.  It's the first time in a LOOOOONNG time that we've hatched eggs at our school, and I'm TOTALLY not sure why...it's been a HOOT!
It's also been a little stressful too....starting with having to find a different supplier of fertilized chicken eggs when our original source wasn't able to fill our order.  We found one in Iowa, and they arrived about 25 days ago via UPS.
The next stress was making sure the incubators were at the proper temperature, and that the humidity level was high enough to facilitate the hatch.  After that, we worried because none of the eggs hatched on day 21.  LUCKILY, they DID start hatching on days 22 and 23, and we now have 15 peeping chicks melting the hearts of everyone who sees them! 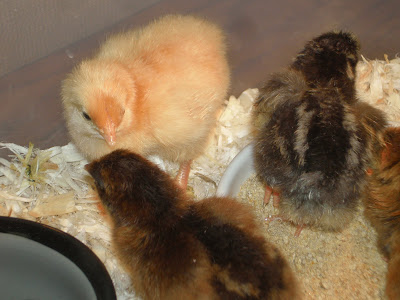 I've been AMAZED at the reaction people have had to them...from the music teacher wanting to "free them all from the brooder" and run with them (!), to the teachers who don't typically participate in anything sneaking up for a peek when they THINK no one is around!  I have to admit...I ADORE them, and will be sad to see them go to the farm tomorrow.  I've taken on the unofficial role of "chick watcher", and, so far, have been in three times this weekend to check on them. 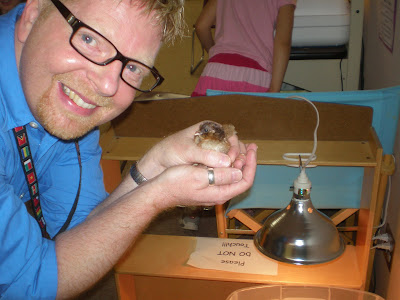 It's been a HOOT to hear from people via e-mail and on Facebook who have been watching the progress on the CHICKEN CAM! that we set up....from streaming video from the incubators during the "hatch", to watching the hatched chicks flop around in their temporary chicken house, people have enjoyed watching them!
Here's a screen shot from the camera: 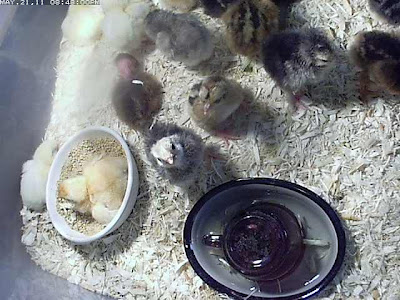 Here's hoping YOU were able to enjoy a rewarding project lately too!!!!
Posted by Jeff S. at 9:30 AM No comments:

I am SERIOUSLY loving Charice Pempengco and her "cameos" on GLEE!  Wow!!! 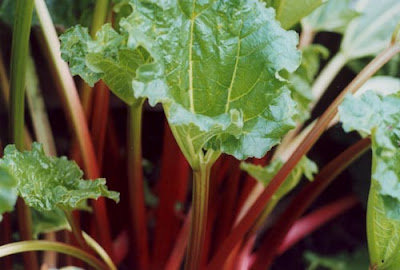 Two of my recent FAVORITES came together this weekend...the beginning of rhubarb season and the Minneapolis Farmer's Market!  I have a LONG history with rhubarb.  One of my earliest memories is sneaking into my neighbor's yard in Chariton, Iowa, and stealing stalks of the stuff, then running back to my yard and eating it...right there...no sugar...nothing sweet...just plain, sour, FABULOUS rhubarb (I think I remember this incident because I got my BUTT KICKED by my mom for stealing it!).

I love both (rhubarb and the farmer's market...not getting my butt kicked), and was able to snag some DANDY stalks at a little farm stand in the middle of the market yesterday.  Five stalks for a dollar seemed like QUITE a deal, so I bought three bundles, and have just finished mixing together and baking a RHUBARB CREAM PIE.

Place top crust on filled pie. Sprinkle with sugar and cinnamon, and wrap edges with foil.

Here's hoping YOU are enjoying the bountiful rhubarb now popping up at farmer's markets, grocery stores, or in your very own yard!  Oh yeah...if your neighbor has rhubarb, please ASK before taking any...I'm just saying...!!!!
Posted by Jeff S. at 1:46 PM 5 comments: 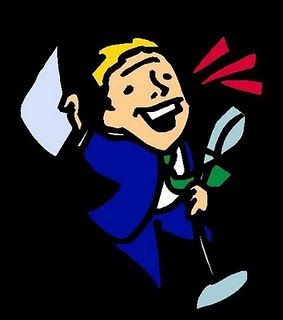 My friend, Kyl, who lives in Tokyo, spent time recently volunteering with ALL HANDS, an organization that is helping with the cleanup effort in Japan.

Here's the link to his blog about the experience:
http://www.volunteeringintohokujapan.blogspot.com/.  I HIGHLY recommend reading it...wow...!!!! 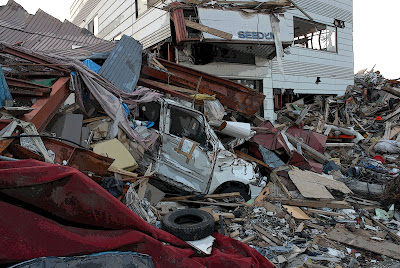 A photo from Kyl's blog of the HUGE job to be done!!
Here's hoping YOU have the opportunity to TRULY make a difference...like Kyl!!
Posted by Jeff S. at 8:01 AM No comments: