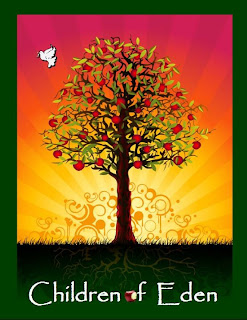 It's been SO crazy busy with the show the last few weeks, that I haven't had a chance to post for awhile!  I also haven't been able to find the words to express my feelings for the musical "Children of Eden", and, since I knew this would be the next thing I wrote about, haven't even tried.  What I say won't do it justice, but here goes...

I'll admit right here that I didn't want to audition.  My job took a turn for the IMPOSSIBLE this year, and I just didn't think I had time.  I also saw the show a few years ago, and wasn't that crazy about it.  I remembered a few songs that were kind of cool, and a really neat number involving a lot of animals, but really wasn't enthused.  LUCKILY, my friends Kris and Rachel were persistent, and FORCED me to go (the last time they did this, they didn't get cast, and I ended up doing the show without them...DISLIKE...).  I'm REALLY glad they did, because this was the EXPERIENCE OF A LIFETIME!!!!!

I think "Children of Eden" is now probably my FAVORITE musical in which to have performed!  I LOVED playing Seymour in "Little Shop of Horrors" because the music is so AWESOME, and the part is so much fun.  I LOVED playing Joseph in "Joseph and the Amazing Technicolor Dreamcoat" (the THIRD time I did it), because I got to return to my home town, after having moved away a year earlier, to do the show with all of my old friends, and the production was really fun to be a part of.  I also LOVED playing Albert Peterson in "Bye Bye Birdie!" this past spring, because the music is FABULOUS and I got to work with my friend Shana, who is AMAZING, and got to share the stage with a group of UNBELIEVABLY talented teenagers!!

I can't explain WHY "Children of Eden" is now my favorite...I don't think there's just one single reason.  The music is BRILLIANT!  Our staging and lighting were AMAZING!  The cast was SUPERB!  The orchestra was FABULOUS!  The crew was EXCELLENT!  I think all of these things together made it so special. 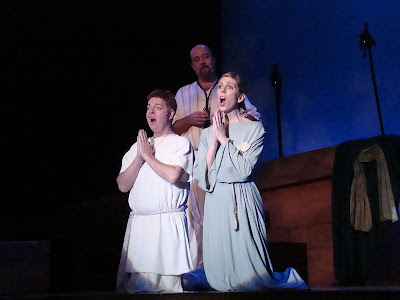 It is also my favorite because Adam was such an AMAZING part to play!!  I typically get cast as the "funny guy" (not sure why...ha!).  Don't get me wrong...I LIKE that type of role.  It's fun, it's easy for me, and I don't have to work very hard on delivery...it's what I do.  This part was different....Adam is complex.  He starts out very simple and childlike, then goes through the metamorphosis of becoming the concerned (and somewhat obsessive) parent of Cain and Abel.  That transition was AMAZING to portray. 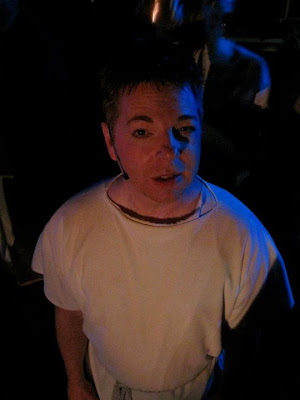 Backstage before the final performance
A friend who saw the show gave me the greatest compliment...she said "Your voice is gorgeous and I loved your characterization of Adam. It was sweet but not stupid -- endearing but not cloying. The show was FABULOUS (I cried the whole first act) and you were a magical part of it. Congrats!!"

Another friend said "I also wanted to thank you for a wonderful gift of your performance in this show - great character, and growth in the character from a child-like personality to one who has to take the 'father' role, and make the hard decisions. You were amazing. Your voice is beautiful, as always. Thanks for a wonderful - thought-provoking evening!"  He and I tend to compete for the same roles, so I considered this HIGH PRAISE indeed!

My sister made the comment that she thought this was my best role to date.  She said that all the other stuff I've done has been "easy", and was just me being me on stage.  She said that she could really empathize with the decision Adam had to make in the garden, and my portrayal made that very real.  She actually started tearing up describing it to me on the phone the next day...excellent!! 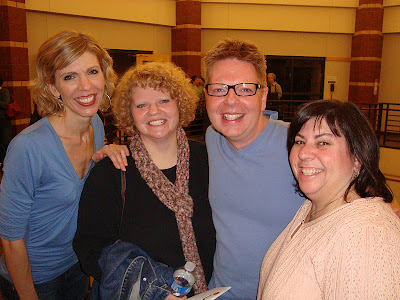 Peg, Tena, Me, and Alisa after the show!
A friend stated that because my co-star Eve (BRILLIANTLY portrayed by my new dear friend, Peg) was so good in the role, I was better too, because I couldn't just "slide by"...I really had to work at it to bring my performance to her level.  I KNOW I was better in this role than I otherwise would have been, because of her AWESOME talent!

Countless friends and family came to the show (thank you all for being there....I REALLY appreciate your support), and many cried through the entire first act.  I had friends who came to see it TWO or THREE times...it was THAT special.

Casts of shows typically get pretty close during the rehearsal process, but the cast of this show was SOOOOOO close, and SOOOOOOO amazingly talented!!!  We went out after MANY rehearsals, found whatever excuse we could to meet (why yes I DO need to get gasoline at 5:00 at that gas station...see you there!), and ended up having dinner each Wednesday during the run because we couldn't stand to be away from each other for the five days between shows.  Many of us are already making plans to see each other in upcoming shows, and, as I put it on Facebook recently, "I'm not ready to let this go, so don't be surprised if I just SHOW UP on your doorstep some day soon". 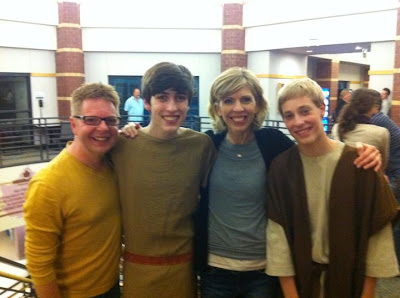 "Adam's family" after a performance (not the "mysterious and spooky" ones...!)
I LOVE these people.  I LOVE this theater company.  I LOVE this play.

Here's a "private" copy of one of my ballads from Act I.  Stephen Schwartz can SURE write a song...

I started rehearsals for this show on the first day of school WAAAAAAY back in September. My entire school year has been wrapped around all of those blocking rehearsals and choreography sessions and vocal practices.  I'm having a difficult time "just" working now.

Here's hoping YOU were part of something amazing recently too, and that you are a better person for it as well!!!
Posted by Jeff S. at 8:00 AM 6 comments: