I NEVER thought losing weight would be an issue for me...I was COMPLETELY scrawny through high school and college, and remember actually WANTING to gain weight. SOOOOOOOO not my reality any more. Food is TOO MUCH of a temptation, and there's SOOOO much good food out there to enjoy!!!!

Anyhoo...I signed up for Weight Watchers For Men online a month ago, and I HAVE to say that it's AMAZING. I've been "working on it" for four weeks, and have lost TEN POUNDS!!!! It hasn't been easy, and it hasn't been particularly fun, but it HAS worked! The whole premise behind Weight Watchers is that you CAN eat what you want...you just have to focus on portion size, and throw in a bunch of fruits and vegetables to keep you full.

The online version is AWESOME, because you don't have to attend any meetings, and you can track what you eat and how much you exercise from the privacy of your own home. I SERIOUSLY don't know how people do "weigh ins" at meetings. I remove EVERYTHING I'M WEARING before I step on the scale. I'm pretty sure that's a "no-no" at a meeting site!

I always thought the notion of "journaling what you eat" was STUPID. How could that POSSIBLY help you lose weight, I wondered. Well...IT WORKS! I'm TOTALLY aware of how many points I have to use each day, and TOTALLY work to stay within that boundary (side note...you get FEWER points as you get nearer your goal...WTH??!!!).

So...four weeks in...a week and a half until the cruise...six pounds to go. I'm FAIRLY CERTAIN I can reach my goal (but had to LAUGH when I entered my weight loss for the week...the message that popped up said congratulations on my progress, but that I was losing weight TOO fast!). 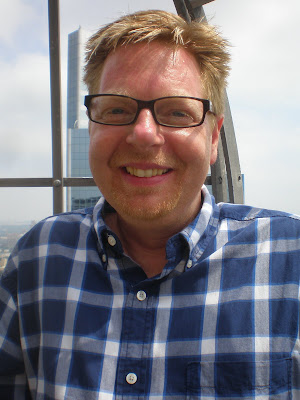 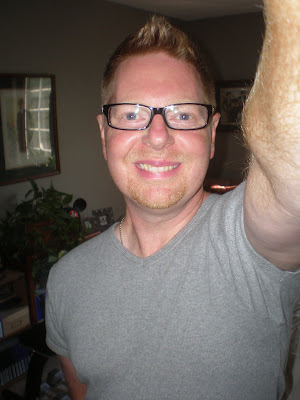 NOW
Here's hoping YOU are "winning the war" with one of YOUR personal battles too!
Posted by Jeff S. at 5:39 PM 3 comments:

I was trying to run down the battery on my ipad, so decided to surf YouTube and play a couple of videos. Ran across this AWESOME version of "Don't Stop Believing". It's posted by KurtHugoSchneider, and sung by Sam Tsui. I have NO IDEA who this guy is, but he's REALLY good!  He sings all of the parts, with multiple images of himself on stage...VERY cool!!!

Here's hoping YOU found something online recently that made YOU smile!
Posted by Jeff S. at 4:19 PM No comments:

Wild Turkey Family Out for a Stroll...

I was sitting on my deck this morning, reading a magazine, when I heard a "clucking" noise.  One of the turkeys that has been hanging around the complex the last four or five months was, apparently, parenting the nine "turkey-lets" that were born about a month ago.

After trying to locate her on the ground, I realized that she was in a tree across from my deck.  I then noticed that the remining nine turkey chicks were also in several of the trees nearby.

After about 10 minutes of clucking and cheeping back and forth, they all flew down and started wandering around the yard.  I then noticed that the two males and the other female were also in the yard...just "hanging out". 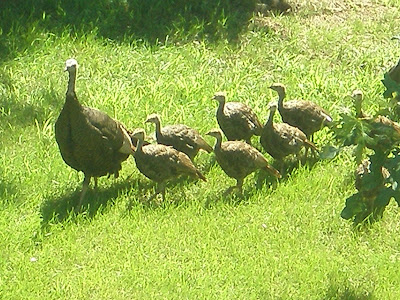 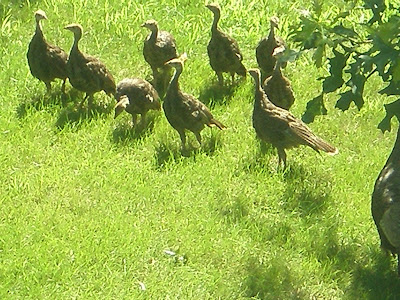 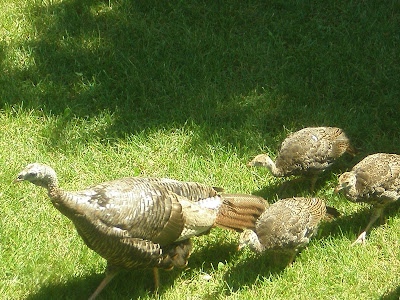 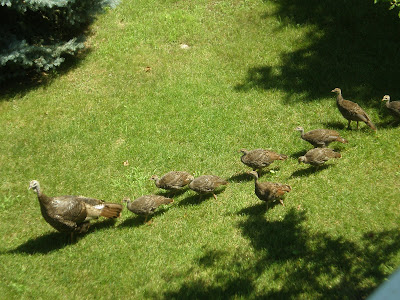 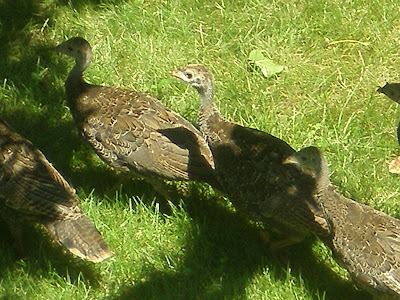 Here's a REALLY grainy video of their wanderings...


It's AWESOME to live close to a wooded patch of land.  In addition to the turkeys, we also have deer, coyotes, and any number of rabbits, squirrels, and birds...right here in the middle of Eagan!

Here's hoping YOU are able to enjoy nature where you live too!!!
Posted by Jeff S. at 1:13 PM No comments:

It's been QUITE the summer for visits!  First Tena, then Amy, and now my cousin Kim...all within the span of about a month!

Kim came up on Friday evening, and we HIT THE GROUND RUNNING (as is usually the case when someone comes to play!).  She got stuck in traffic, and bad weather, and road construction, so didn't get here until about 9:00.  We rushed right off to Houlihan's to enjoy some "small plates", since we were all STARVING (since we waited to have dinner until she got here).

We were GOING to go and do karoake at Bogart's in Apple Valley, but, after we got done eating it was 10:30, so we opted for coming back to my place and going to bed (we're old...what can I say??!!).

Saturday morning, we got up, got ready, and headed to Colossal Cafe (of course!) for flappers...actually Kim got flappers, and Duane and I had breakfast sandwiches.  YUM!

After breakfast, we headed to A Baker's Wife Bakery so that Duane could get some bread (and we could pick up some pastries to take to Robin and Dave's).  We then spent a little while at Robin and Dave's, so that Kim could see the new interior design stuff (and the new patio).
After chatting, we headed to the 133rd Airlift Wing Minnesota Air National Guard base for the 90th Anniversary Air Expo Program.  NOT on the scheduled agenda, but Dave mentioned it while we were at their house, and Duane really wanted to see it (THANKS A LOT DAVE!!!).
It was actually pretty cool.  The base is off the side of the Minneapolis/St. Paul airport, so, in addition to touring through various military jets and cargo carriers, we were also able to get really close to the runway, and were able to watch planes taking off and landing.
It was BEASTLY hot, and I got burnt to a crisp, but it was cool to see the various planes up close.
﻿
After our adventure with the Air National Guard, we took the light rail from Ft. Snelling station to downtown Minneapolis, and, after a brief shopping spree at Marshall's, went to one of my FAVORITE places in the cities...the Foshay Tower!!!  I LOVE the view from the 30th floor, and it was LOVELY to, again, look down over the city from such an AWESOME vantage point!
After "observing" the city from the tower, we headed to Brit's Pub for beverages (I had a Pimm's, of course, Tena!!!), and ended up having dinner there too.  I had the beef and potato pastie...YUM!  We then headed back to the suburbs, stopped at Ring Mountain for a quick gelato (I had the watermelon lime sorbet!), and spent the rest of the evening watching "Here's Lucy" on DVD, and called it a night!﻿
Sunday (today), we met Robin, Dave, and the girls at Wise Acre Eatery in South Minneapolis for breakfast.  OH MY GOODNESS...if you are anywhere near 5401 Nicollett Avenue, GO THERE!!!
I had an AMAZING "toad in the hole" concoction, which involved cutting a hole in a slice of meatloaf, filling the whole with an egg (fried), which was place on a couple of slices of home made bread, which was resting atop a scoop of pureed carrot/mashed potatoes...AMAZING!!!!!  Approximately 80% of the food cooked at the restaurant is grown locally on their farm north of the cities, and it is REALLY, REALLY GOOD!!!!!
﻿
After breakfast, Robin and Dave and family headed back to South Minneapolis, Duane headed back to Eagan, and Kim and I went on a mini shopping spree at IKEA.  Kim then headed south to Iowa.  What a FUN, FUN, FUN weekend!
Kim will, HOPEFULLY, be back soon for another adventure in the cities!!!!  Here's hoping YOU were able to ENJOY spending time with family recently too!!!
Posted by Jeff S. at 8:57 PM No comments: